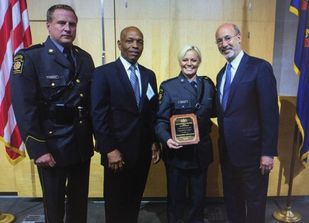 The awards recognize commonwealth employees for exemplary job performance or service that reflects initiative, leadership, innovation and increased efficiency. Minnucci is one of 37 state employees to be honored for 2016.

Sunny Day Camp was modeled after the long-running Camp Cadet program, organized by state police troops across the commonwealth each summer. Like Camp Cadet, the goal of Sunny Day Camp is to build strong relationships between the PSP and the communities it serves.

More than 250 people, including 86 participants with special needs and their families, attended the inaugural Sunny Day Camp on August 6, 2016, at Penn Township Park in Chester County. Corporal Minnucci credits the inspiration for Sunny Day Camp to her brother Gabriel, who has special needs, and enjoyed serving as her “assistant” at a previous Camp Cadet.

“Gabriel loved participating in Camp Cadet with me and I realized that children like him were at risk of missing out on the fun of summer camp because of their special needs or disabilities,” said Corporal Minnucci. “I’m thankful for the support of my fellow troopers and the entire community of Chester County.”

The campers saw displays from a PSP Special Emergency Response Team (SERT) and the mounted unit. They also participated in games and a graduation ceremony with certificates. The event was supported by more than 50 troopers who volunteered their time, local businesses, and the Special Olympics.

“I’m exceedingly proud of Corporal Minnucci for spearheading this event from concept through implementation,” said Avondale Station Commander Lieutenant Richard D’Ambrosio, who nominated her for the Governor’s Award for Excellence. “It was her vision and hard work that made the lives of several people brighter through the Sunny Day Camp.”

Corporal Minnucci is now part of the Bureau of Training and Education at the state police academy in Hershey, PA. Sunny Day Camp will return to Chester County – and several other counties throughout Pennsylvania – this summer.

For more information on the Pennsylvania State Police, visit www.psp.pa.gov.